Whenever Kenya 7s is mentioned, Collins Injera is among the first names that pop up in one’s mind.

The back has great statistics both on the local and international scene and has been a joy to watch whenever he is in action for the National Team or his Club Mwamba RFC.

He has had great moments in his career and Scrummage takes a look at some of the best in the last 10 years:

May 21, 2016, is a day that Injera’s fans will live to remember.  Though Kenya failed to shine in the final leg of the season, the star scored in the dying minutes of the clash against France at London 7s to become the Alltime World 7s  Series Top Try Scorer with 231 tries.

It was a special moment as he did it in front of his parents Mr Wilfred and Mrs Dorothy Emonyi who were following the action from the stands at Twickenham Stadium. It was his senior brother and teammate Humphrey Kayange who popped the ball to him to score the crucial try.

To achieve the feat, the Mwamba RFC man scored his 228th try against Portugal in the first match of the tournament while Kayange set him up for the 229th try which was in the match against Scotland. He tied with the then leading scorer Santiago Gomes at 230 after a solo effort try which saw him sell a dummy and score another try against the Scots. He would then complete the job in the clash against France.

He headed to the tournament with 22 tries. Only Argentina’s Santiago Gomez Cora and Zhang Zhiqiang had more tries than him in the tournament (23 and 25 tries each).  Injera’s try in their 21-14 loss to USA in the opening match of the tournament played on Friday 27 March saw him tie with Gomez at 23.  Injera also scored in Kenya’s 17-7 loss to England in the second game to move to 24 tries.

The speedster then tied with Zhang after landing a try in Kenya’s  21-0 win over Portugal in a Shield semi and just like the London 7s, he set a new record on the final day, scoring the 26th try as Kenya beat Japan 26-7 to win the Shield final.

He held on to the record till April 5, 2019, when he was overtaken by Dan Norton who stretched the lead to 32 tries.

The two tries saw him move to 1,034 points, surpassing Asego who had 1026 points. In the tournament, he managed to score the 200th series try as Kenya beat Japan 24-12. A day he famously signed the TV camera when he got to 200th try.

Kenya had not appeared in final since 2013 and they ended the wait by beating Argentina 15-12 in the semis to reach Cup final on April 17, 2016.  It was in a  dramatic fashion as Fernando Luna converted try saw Argentina lead 7-0 at halftime.  Augustine Lugonzo scored and his try was converted by Sammy Oliech to tie the scores.

Axel Muller’s converted try stretched Argentina’s lead but Frank Wanyama tied the scores at 12-12 and Injera stood to convert but missed the chance to put Kenya ahead. The clash was poised for extra time but Kenya got a penalty in the dying second of the clash. Injera rose and belted in the ball from a 40-metre range to send the team to the finals.

In 2018, the former Vihiga High student set another record. When he ran on the pitch for the opener against Tonga in 2018 World Cup, he became the first Kenyan to make three straight World Cup appearances.  His first appearance came in 2009 at the United Arab Emirates as Kenya beat Tunisia, Hong to finish second behind England who beat them in the final pool staged match. They beat Fiji 43-7 in semis but their journey ended following a 12-0 loss to Argentina in the semis. Kenya finished as bronze winners.

His second World Cup saw him feature in the 2013 edition held in Russia. Kenya went on an unbeaten run whipping Philipines, Zimbabwe and edged Samoa to top the pool. A 24-19 win over France send Kenya to the last four but a controversial 12-5 defeat against England cut short their journey and another defeat against Fiji saw them finish fourth.  2018 saw Kenya perform dismally but Injera stood out as Kenya finished 16th.

6.First-ever Cup in the Series

The utility back bagged two tries to guide Kenya 7s to first-ever Singapore 7s triumph beating Fiji 30-7 in the finals staged at the National Stadium in Singapore. This was the maiden Cup win  in the World Sevens Series ever since their first-ever appearance which was in Dubai in 1999. Before the victory, Kenya had reached the Cup final two times in 2008/2009 season in Adelaide and 2012/2013 in Wellington.

7. Player of the final in Singapore win

His two tries in the 30-7 win over Fiji saw him become the player of the final.  Commenting on the victory, Injera said belief was key to their success over Fiji.

“Coming to this final we knew we had to believe, and go out there and play, and play hardball. The guys did and we came out with a win. It was frustrating not being able to get on the scoreboard, but coming to this stage you have to play as a team, and the tries eventually came and the points came. I am happy with what we were able to achieve as a team and it came outright. It means a lot, to get one over on Fiji, especially with that amount of points, it means a lot.” 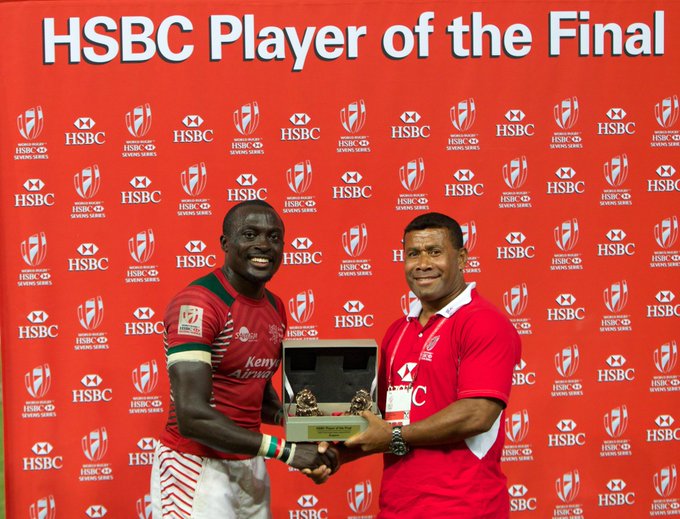 Injera together with his brother Kayange were decorated with presidential Order of Golden Warriors award in May 2010. The two were rewarded for the efforts that saw Kenya 7s  perform well during the 2008/2009 Series and the Rugby World Cup.

Kenya reached their first-ever Cup final in Adelaide for their sixth overall position with 64 points in the series.

Under the tutelage of Tito Oduk’s Mwamba RFC scooped the National 7s Circuit title after amassing 134 points. This saw them reclaim the title they had last won in 2008. Injera achieved the feat together with fellow Kenya 7s stars Kayange, Asego and Horace Owiti.  Edgar Abere,  George Mbaye, Louis Kisia and Steve Okeyo were also part of the squad. Mwamba retained the title in 2011. This saw them become the lone side to have achieved a double twice since 1999.

10: Most matches in the World 7s Series for Kenya

According to the World 7s Series, Injera has played 409 matches Kenya in the series. It is the most number of matches ever by a Kenya 7s player. In that period he has no red card and has conceded four yellow cards, 398 carries and he is the leading try and points scorer.