England prop Kyle Sinckler has revealed that has no recollection of England’s World Cup final defeat after being knocked unconscious early in the match.

Sinckler collided with team-mate Maro Itoje during a tackle on Makazole Mapimpi in the third minute of South Africa’s 32-12 victory. The forward later walked off the field after regaining consciousness and followed the remainder of the clash on the bench.

“I didn’t really know what was going on.  I can’t remember anything really from the final. They said I came back out, but I can’t remember that. It took three or four weeks to get over the final. It was dark. You go through phases where you’re distraught, feeling sorry for yourself and down in the dumps,” He told Press Association. 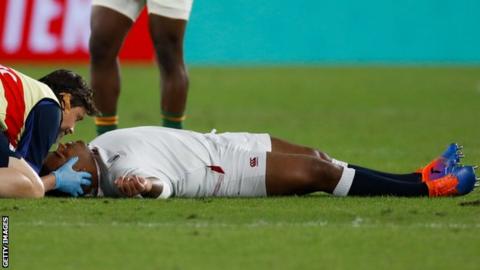 “It was an innocuous incident which was just meant to be, but it was really, really tough. You ask yourself, ‘why me? I’ve trained so hard to get to this moment. I’ve dreamed it, this is my life. But then I snapped out of it, realising that you can either be the guy who is always feeling sorry for yourself or use it as motivation to push on, he added.

Sinckler, 26, enjoyed an outstanding World Cup campaign in which he had scored his first Test try in the quarter-final against Australia.