Australia’s head coach Michael Cheika has named a sublime squad to take on South Africa’s Springboks, in his 3rd Championship match at Suncorp Stadium.
Australia will look to get back to winning ways after a double loss to New Zealand, and Cheika has entrusted his experienced talismen to do the job.
Forwards
Scott Sio starts at loosehead prop with Tatafu Polota-Nau slotting in at hooker. Allan Alaalatoa, who had an impressive super rugby campaign, gets to start at tighthead prop.
Rory Arnold and Adam Coleman pair up once more as the match day’s locks. The back-row is an experienced one, Lukhan Tui starts at blindside flank, the industrious Michael Hooper who doubles up as the captain retains his number 7 jersey and King of breakdown David Pocock, from a recent sabbatical, gets to provide the stability that their back row has lacked for a while.
Backs
Will Genia will pair utility back Kurtley Beale at the halfback positions. Hard running Marika Koroibete will be the blind winger as Matt Toomua and Reece Hodge get to link up in midfield.
Fleet-footed Dane Haylett-Petty will start at the right wing.
The ever so reliable Israel Folau is deployed at fullback and should be influential in the air since South Africa’s gameplay is heavily reliant on kicks.
The bench is not short of experience and the replacements are Folau Faingaa,Tom Robertson,The outstanding Taniela Tupou,Izack Rodda,Ned Hanigan,Joe Powell, Experienced flyhalf Bernard Foley and Jack Maddocks who gets to start off the bench in as many matches. 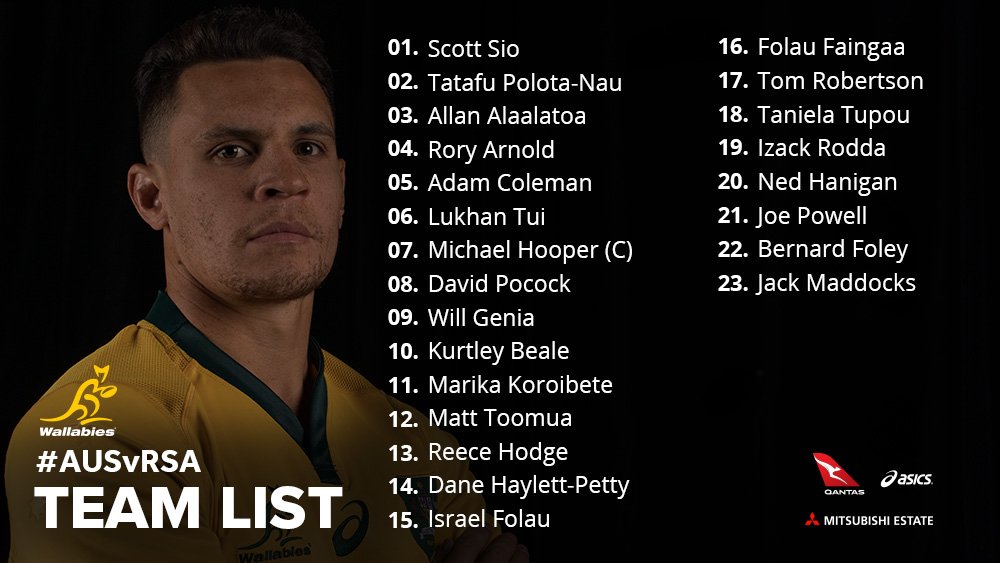