The KRU Championship will enter the playoffs stage on Saturday 14 March with four sides set to battle for the remaining two semifinal slots.

An upset loss to previously Championship strugglers, South Coast Pirates to being beaten at home by Strathmore Leos the following week was the story of Mean Machine when the season started. But despite the early turbulence, Machine stood tall and sailed through, carving their way into the playoff bracket.

They managed to win 11 games and ended up losing five games (Pirates, MMUST, Suburbs and to Leos twice). Machine will be hosting Egerton Wasps this Saturday and if they manage to win this blockbuster, they will close in to secure Kenya Cup status come 2020/2021 season.

Egerton Wasps are making a debut in playoff games after struggling in the first two seasons. These two sides have met on three occasions. Machine have proved superior as they have won two of those clashes, they have drawn once and Egerton is still yet to register a win over Machine. In their first meeting, Mean Machine blanked Egerton 26-0 in Nairobi. They then drew 11 all in the 2018 Varsity Cup semifinal which was later decided by penalties. The last time this two sides met was in February and Machine again walked away with a win but this time round it was a close affair, the game ended 18-15 in favour of the men in blue.

The low scoring encounter sets the stage for an epic battle between these two varsity sides come Saturday in University of Nairobi grounds. Mean Machine will be keen to utilize the home-ground advantage to march into the semis while the Enos Otieno charges will be banking on the likes of Maurice Achola, Gilbert Onsare and co. to dominate up front, in turn, laying a good platform for the likes of the lethal Leon Nyang in the backline to tear apart the hearts of the most decorated University rugby team in the land. The winner of this duel will play against MMUST in the second semifinal.

USIU has never failed to feature in playoff duel since championship formation. This season they’ve been so unpredictable, USIU has been failing to win the games one would expect them to win. From suffering a defeat in the hands of newly-promoted Eldoret RFC in week one to being beaten by a relegation-bound Mombasa in the penultimate stage of the competition.

They have ended up losing seven games and somehow have been lucky to manage a fourth-place finish after struggling at some point in the season. On Saturday, they will be hosting Northern Suburbs, a side that is in its debut season and has surprised many by making into the playoffs. The Suburbs have been enjoying their stay in this new territory, it’s evident they’ve performed beyond everyone’s expectations.

They have conjured up seven wins and have gone down nine times. They finished the season at position five with 34 points. These two sides have met only once and it was USIU who emerged victorious after grounding a late try to win the game 22-18 in the regular season clash.

The unpredictable USIU Martials side will need to be on their top form to avoid blushes of being eliminated by the newcomers. They will need their best players to show up to the party in order to make a successive back-to-back semifinal appearance. They’ll hope for the likes of Kenyan International flyhalf Charles Kuka to steer the ship nicely around, Eliud Mulakoli to run some good lines as he has been doing all season, the likes of Tobias Otieno to swing the sledgehammer inturn softening up every white and sky blue shirt and speedster Fred Okoth to finish off neatly when the opportunity arises.

The Jawchire lads, on the other hand, will be hoping for some good conditions underfoot to fuel their ardent desire for some good running rugby in order to move around the heavy USIU pack. It is going to be a difficult one and if the perennial Championship mainstays USIU won’t be on top of their form on Saturday, Northern Suburbs may end up upsetting the hosts at their own backyard. 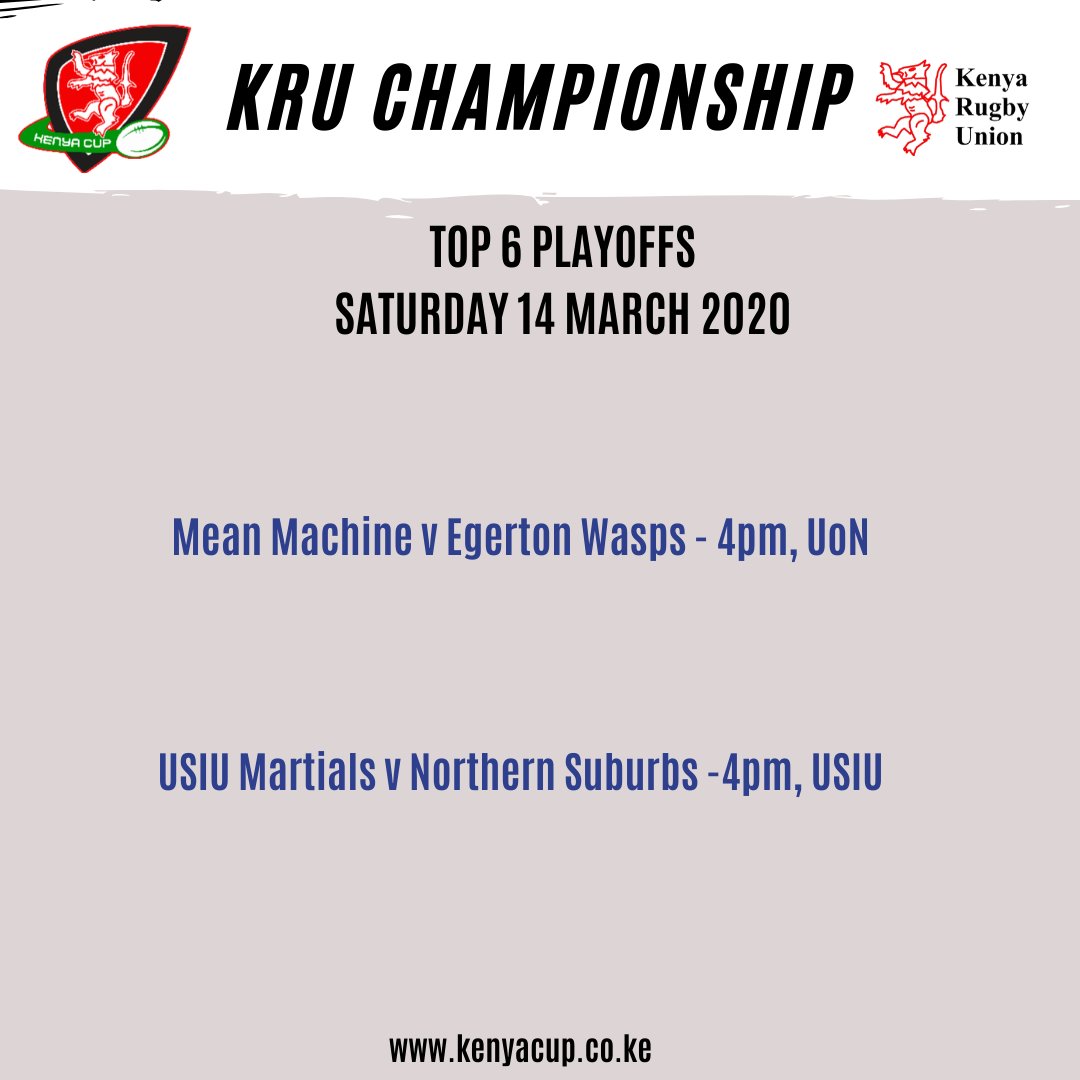